NEWS AND INSIGHTS FROM FINTRX

For individuals starting a business, Covid has surely turned the world upside down. Many entrepreneurs aren't sure if investors have closed their doors for good, whether they should adjust their valuation, or if they should forgo all hope of finding funding at all - at least for now. Startups need to be patient yet decisive whether they want to be in offense mode or shift positions until markets aren't as volatile. To shine a light on family offices making early-stage investments, we examine different trends transpiring within the alternative wealth space and private capital markets. Throughout this narrative, we explore single and multi-family offices investing in Venture, Series A, and Series B funding rounds.

When you hear discussions of Venture, Series A, and Series B funding rounds, these terms are referring to growing a business through the use of external capital sources such as family offices, for instance. Series A and B funding rounds are often considered stepping stones in turning a novel idea into a pioneering global company. Before we dive in, it's important to identify the different participants throughout this process. First, there are the individuals, or prospects, hoping to gain funding for their company. As the business becomes increasingly mature, it often advances through funding rounds.

On the other side are potential investors which include family offices. If the company grows and earns a profit, the investor or family office is rewarded based on the initial investment made. A key distinction between funding rounds has to do with the valuation of the business, as well as its maturity level and expected growth. Prior to any funding rounds, analysts take a valuation of the company under consideration. Valuations are derived from several factors, including management, proven track record, market size, and risk - among others. Some you can predetermine by analyzing data trends and others you can’t. These factors influence the investors' likely to become involved.

The large majority of successful startups have put forth efforts to raise capital through rounds of external funding. These funding rounds provide outside investors (and wealth vehicles, such as family offices) the opportunity to invest in a growing company for equity or partial ownership. Once you understand the distinction between each funding round, it's significantly easier to analyze the ongoing data trends and developments taking place - and ultimately, the direction you want to go.

Venture funding rounds help a company finance its first steps, including market research and product development, for instance. With venture or angel investor funding, a company has help in determining what its final products will be, who its target demographic is, and so on.

Once a business has developed a track record, it may opt for Series A funding to further optimize its user base and product/service offerings. In Series A funding, investors look for companies with novel ideas and a powerful strategy for turning that idea into a successful business.

Series B funding is about taking businesses to the next level. Companies that have gone through venture and Series A funding rounds have already proven to investors they are prepared for success on a larger scale. Series B funding is used to grow the company so that it can meet higher levels of demand.

Early-Stage Investments Broken Down by Type

As outlined in the chart below, it appears the $50-100 million AUM range is the most popular for family offices making early-stage direct transactions. Family offices with a smaller AUM are more inclined to invest directly more often than those with a larger AUM size.

Amount Raised for Each Round 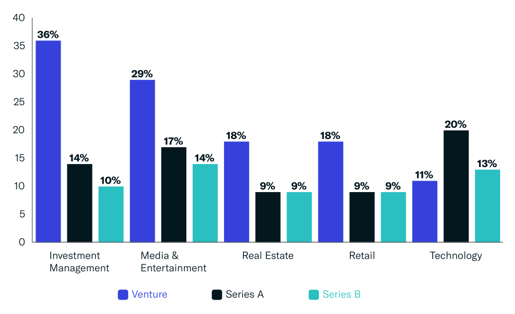 The charts below show the percentage of family offices making Venture, Series A, and Series B investments broken down by the size of the company. As you can see below, smaller company sizes prove to be most popular with early-stage investors. 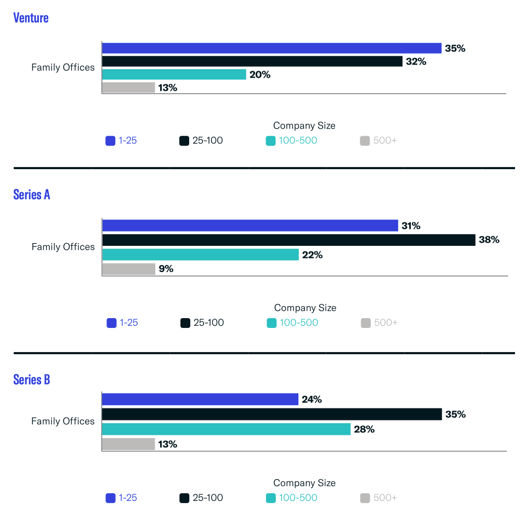 Regional Breakdown: Top 3 Regions for Each Round

As outlined in the chart below, North America, Europe, and Asia are the most active regions for early-stage investors, with the rest of the world making up between 10% and 11%. North America is the most popular region for venture funds, ranging between 53% and 61% respectively.

With complete coverage of over 3,090+ family offices, 15,800+ family office contacts, and 19,600+ tracked investments, FINTRX ensures direct access to accredited investor intelligence. The FINTRX platform is an essential tool in understanding the family office landscape in the U.S. and abroad, while also empowering users to uncover commonalities with these family offices for effective, personal outreach.

For an in-depth exploration of the FINTRX family office platform, request a demo below.

Renae Hatcher is a member of the marketing team at FINTRX - focused on delivering targeted & relevant family office and registered investment advisor content to our subscribers.